Forget immediate success! The road to success is lined with mistakes and failures… 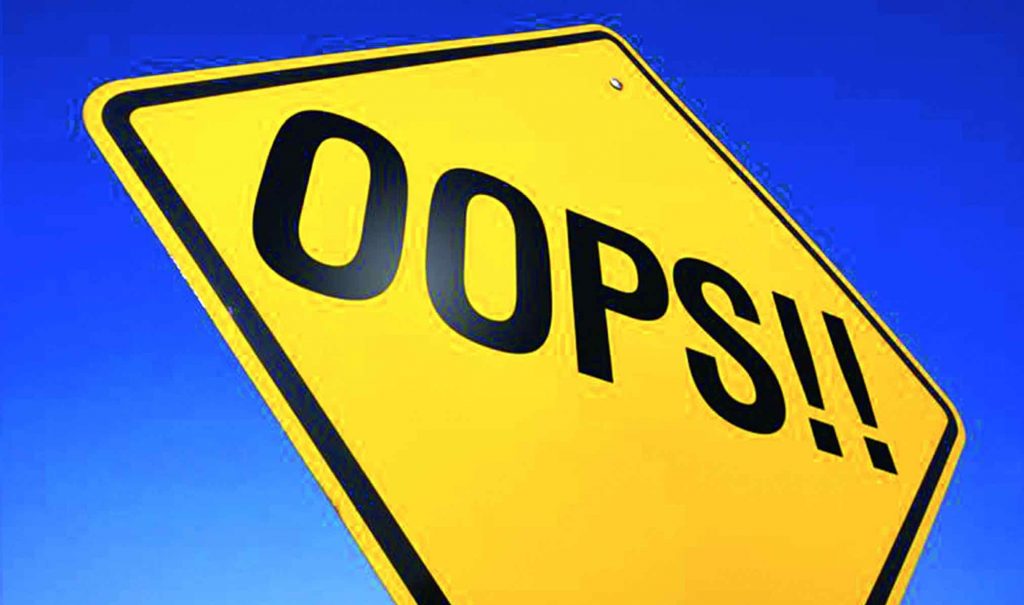 How do you cope with failing at something important? Do you give up, or do you get up off the ground and try again…?

No one can claim to particularly like making mistakes or failing, yet it is an unavoidable part of life. Therefore, we should not be so hard on ourselves (or others) when something does not go quite according to plan.

Two recent studies show that in many cases, failure can be a necessary prerequisite for success. And making mistakes, within reason, increases our ability to learn new things.

According to scientific journal Scientific American, researchers at Northwestern University, US, have, among other things, studied more than 700,000 funding applications for various research projects and also analysed 46 years of investments in different start-up companies. They followed up the projects to see how successful they had been and how the people involved had handled any challenges and failures along the way.

Their short and simple conclusion: “Every winner starts out as a loser!”

What the researchers found was, perhaps somewhat surprisingly, that the projects and companies faced with problems and failures along the way, were also the ones which to a greater extent stood out as winners. Those who had had an easy ride from the start were, on average, not as successful.

Unfortunately, hard work, stamina and to keep trying are not enough. The researchers discovered other conditions that separated the winners from the losers:

• Do not change too much! If a project or business idea fails, it does not necessarily mean that everything about it is wrong. Therefore, changing too many things may not be the best way forward. Instead, try to spot exactly what was working and what was not and then focus on improving the latter.

• Fail fast! The number of failures is not crucial, but the time in between them. Those companies and projects that succeeded in the end had a shorter time span between their failures. “The quicker you fail, the greater the chances of you succeeding next time”, is the rather comical conclusion drawn by the researchers.

So, it is all about learning from your mistakes and to do so quickly, which brings us to another research report from the University of Arizona, where they claim to have found the “sweet spot” of learning, i e the perfect level of difficulty when it comes to learning new things as quickly as possible.

The researchers used machine learning, where they let advanced computers solve some simple tasks, for example “looking at” pictures of hand-written numbers and then learning to distinguish even from odd numbers, as well as recognising different geometrical patterns and placing them in the correct category.

If the tasks were too easy, the computers learnt very little or nothing at all. The same was true of tasks that were too difficult.

The fastest learning curve was noted when the tasks were just a little bit more advanced than what the computers were already able to do. The optimal level was found at 85 % correct answers and 15 % wrong answers.

Similar research has been conducted on how animals learn, and the results have been the same. The scholars see no reason why the 85 % rule would not apply to humans too.

If you always stay within your comfort zone, you learn very little. Nor is it advisable to try to learn too much in a very short amount of time, as this just tends to become confusing. A happy medium seems to be preferable, where the level of difficulty means that when you apply your newfound knowledge, your degree of failure will be around 15 %.

This discovery is seen as important for how the teaching in our schools should be conducted, but is also believed to be of great significance for current and future leadership in our workplace.

Work life is changing at a fast pace and the ability to take in and learn new things is already essential for today’s leaders, but is also predicted to become even more important in the near future. It is not just about taking onboard new knowledge to meet the demands that come with digitalisation and automatization. To the same degree, it is about becoming better at communicating with and understanding employees and clients, create a good atmosphere and being an engaging team leader.

The younger generations in particular, have high expectations of their future managers. A recent survey from the Swedish local councils and county councils, show that Swedish 15-24-year-olds value a good, dedicated boss, a good workplace atmosphere and interesting tasks more than a high salary. In a similar survey carried out around 20 years ago, the salary scored top place.

Your ability to keep up with a forever changing world therefore seems to rely on your daring to challenge yourself (to a reasonable extent) in order to learn how to deal with all the new things as quickly as possible. Equally important is your understanding that your failures along the way are crucial for your future success.

Just do not wait too long…